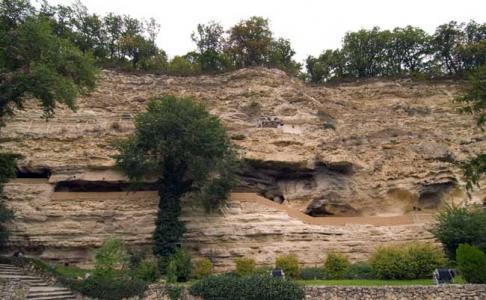 Aladzha Monastery is the most popular medieval rock monastery at the Bulgarian Black Sea coast, which was inhabited by monks- hermits in the 13th – 14th century.
Systematic research of this Christian monument was initiated in the late 19th century by two of the founders of Bulgarian archeology – the brothers Karel and Hermin Shkorpil.
In 1912, the Aladzha monastery was granted the title of "national historical monument" and in 1968 - an architectural monument of national importance.
There is no information about the time Aladzha monastery was created. The surviving frescoes in the chapel show that the place was the center of spiritual life during the Second Bulgarian Kingdom (13th – 14th century).
When Bulgaria fell under Ottoman domination in the end of the 14th century Aladzha Monastery gradually declined and probably at the end of the 15th or the beginning of the 16th century it was completely abandoned.
The Christian name of the monastery is still unknown. The name "Aladzha" comes from a Persian or Arabic word and means "motley, colorful". At the beginning of the last century K. Shkorpil recorded a story according to which the patron of the monastery was St. Spas (derived from ‘Christ the Savior’).
The unusual architectural forms and numerous legends about hidden treasures and ghosts of monks wandering among the ruins create an atmosphere of mystery and mysticism, which has been attracting numerous admirers for decades. Within a century these facts managed to establish Aladzha Monastery as one of the most attractive tourist destinations at the Bulgarian Black Seaside, included in most world guidebooks.
In the 1970-es, a museum building was erected near the monastery, which, along with the permanent exposition related to the past of the cloister, houses other expositions dedicated to Bulgarian Christian culture.
In the museum lobby the visitors can purchase popular science editions, compact discs with Bulgarian clerical music, and a variety of souvenirs.
For several years now, the visitors have also been provided with the opportunity to observe the nighttime performance of the unique audio-visual Aladzha Monastery Legends Show.

The audio-visual spectacle “Legends of Aladzha Monastery” was created with funds granted by Varna Municipality in support of the initiative to support the application of Varna as European Capital of Culture in 2019.
The spectacle is a joint production of the Producer House CSM – Sofia and the Regional Historic Museum of Varna and is dedicated to the 150-anniversary from the birth of the Bulgarian archeology founders – the brothers Karel and Hermione Shkorpil. The park, the special-effect and artistic illumination have been designed and executed by the Varna-based company for lighting “Prisma – Lighting Solutions”, managed by Eng. Stephan Schultz.
The spectacle script-writer is Valeri Kinov, producer – Nikolay Yotov, composer – Georgi Andreev. The choreography is the work of the Artdance Varna ballet formation managed by Nina Kozina, and the historic reproductions – the work of CHIGOT, Varna. Producers are Ivan Yotov and Nikolay Yotov.

The Regional Museum of History – Varna informs you that citizens and guests of Varna will be able to attend the audiovisual performance “Aladzha Monastery Legends” EVERY SATURDAY from June to September, starting at 21:00h.
The show may also be organized and attended during the other days of the week – after a pre-order, made at least five (5) days before the requested date and with a minimum price of six hundred (600.00) Leva.
Looking forward to meeting you!

In chronological sequence has been presented the origination of life on the Planet Earth, the ancient Sea of Sarmatia that 15 million years ago covered the territory of the entire Southeast Europe, the appearance of man, discovery of fire and the first pottery-making practice. Significant place has been allotted to the earliest human civilization known under the name of “Varna Culture” that existed 6 500 years ago along the Black Sea coast and left us the world oldest processed gold in the Neolithic necropolis in Varna. An interesting choreographic production presents the ritual: “Sending of a messenger to the Great Dacian god Zelmoxis”. The foundation of the ancient Odessos by Greek seafarers is revealed, and the Roman period, along with the construction of one of the largest Emperor thermal baths in Europe.
Important place has been allotted to the creation of the Bulgarian Kingdom and the cult rituals of ancient Bulgarians. An interesting film impression presents the time of the great Bulgarian King Boris who converted the Bulgarians to Christianity in the year 865.
A major place in the spectacle has been allotted to the origination and existence of the medieval rock monastery. The daily routine of the monks has been presented – preparing of ritual bread and administering of the most importance Christian sacrament “Eucharistia” (the Holy Communion). The main feature in that scenic reproduction is inscribing of the mural painting from the ceiling of the chapel and the image of a light angel featuring the enigmatic smile of the Gioconda .
The authors selected the year 1444 as the end of the medieval rock monastery, at which time near Varna, in the Memorable battle of nations, knights from all over Europe under the leadership of the Polish-Hungarian King Vladislav III Jagiello attempted to stop the Ottoman invasion towards Europe. The King was killed during the battle and an ancient legend tells that some monks, having a foreboding of the coming defeat, hid the most valuable artifacts from that monastery and from twelve others– books, icons and church plates, and then accepted the martyr death from the hand of the invaders.
After the monastery perished, the legends of the mysterious Rim Papa were born - patron and keeper of the hidden in the underground labyrinths treasures, and of the revived angel from the frescoes, both wondering among the ruins.
The final scene, on the background of Jesus prayer „Lord, Jesus Christ, have mercy on me!” is a symbol of the medieval rock monastery and of the intransience of human and Christian values.
In 2010, the spectacle was awarded the “Cultural Attraction of 2010” prize of the Bulgarian Hotel and Restaurant Association (BHRA).